Roaring around the bend on the busy Bruce Highway in Rockhampton is a massive group of bikies, with guttural engines and leather-clad figures.

It could be an ominous sight, but look closer, and you’ll find it’s actually a group of female riders, all beaming and waving happily as they cruise past.

Leading them at the front, with her flaming long red hair billowing out from under her bike helmet, is Leah Samson.

She’s got a loyal following in these parts, as she’s designed some of the only female motorcycle gear you can get in Australia.

Ms Samson found not only a niche market but also a major safety issue she was hell-bent on addressing.

“I thought, ‘This is a problem. This isn’t just my problem; this is a bigger problem,'” she said.

A gear shift towards safety

It probably goes without saying that roads are far more dangerous for motorcycle riders.

“Per kilometre, studies have found they are 40 times more likely to be killed in a crash than car drivers,” said Ross Blackman, a research fellow from Queensland University of Technology’s Centre for Accident Research and Road Safety. 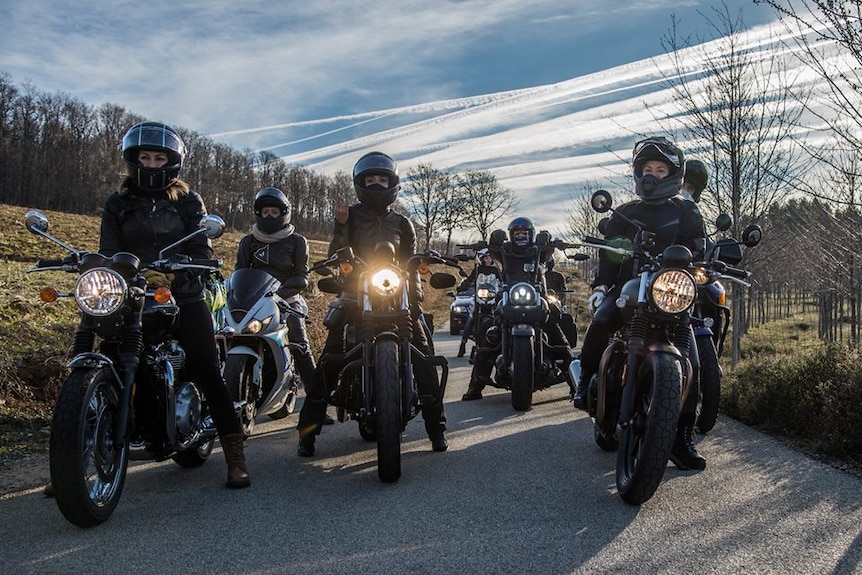 A glaring issue the unit has discovered is inadequate protective gear.

Dr Blackman said while protective clothing was unlikely to stop serious injuries and fatalities, research had found certain protective garments decreased injury risk by up to 45 per cent.

Alarmingly, though, very little clothing on the market fits the bill.

The Motorcycle Clothing Assessment Program, a website that tests gear for motorcyclists, found that of 200 garments they tested, a mere 31 per cent were appropriate for women, and only 14 per cent of those achieved higher than a three-star rating for safety.

Dr Blackman said another issue was the lack of legal safety standards for motorcycle gear in Australia.

“It’s very hard to enforce that sort of regulation,” he said.

“Even the European standards don’t cover the entire garment, they apply to specific parts of clothing, like elbow pads and shoulder pads.”

“[It] is not motorcycle-grade, so if you’re sliding down the road, that is not going to protect you,” she said.

The business idea came about after Ms Samson’s own gear was stolen three years ago.

“It was a down point, very much so, but I decided to turn it into something pretty amazing,” she said.

“It took me about eight years to wear in my gear, truly.

“A full set of leathers, they feel like a second set of skin after a long time.” Ms Samson also channelled her love of fashion into her new venture.

“I would make my own clothes, but not to this level. I had no idea what I was going to get myself into, honestly.”

The former social worker relocated from Melbourne to Rockhampton five years ago, and she now has a baby girl and a partner.

She believes the move to regional Australia was critical to her business success, especially after she tapped into a local women’s business hub.

“But they were willing to give someone like me a go, whereas I think in some of the big cities, there’d be people lining up at the door trying to get in because the level of quality and expertise that we were privy to.” “My original market, I thought, was women who rode motorbikes, but what I’ve discovered is that there’s so much more to it,” she said.

“I’m getting a lot of women asking me, ‘Can you make that design without the armour?'”

Support from the community has kept the fire in her belly strong on those days that feel like an uphill grind.

“I’ve had women coming up to me and saying, ‘I’m behind you because this isn’t just about motorbikes.’

“They didn’t even ride. This is about women supporting women to have choice.”

Watch Movin’ To The Country on ABCTV at 7.30pm on Friday, or stream on iview.